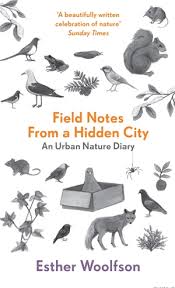 I’ve been dragging my feet recently, feeling a bit meh. Nothing too wrong.

But nothing too right.

Maybe it’s the weather. Spring arrived with sudden sunshine, but the past few weeks have been dull and wet, a reminder (as if we needed one) that the weather in Ireland is capricious and the concept of summer remains a precarious one.

Or maybe it’s the end-of-term busyness, the paperwork and box-checking that’s as far from teaching as it’s possible to get. Or the knowledge that a bad thing happened to a good person I know, which reminded me of the bad things that happen to the good people I don’t know.

Whatever the reason, I’ve been slouching about, flitting from one book to another, finding it difficult to burrow down and settle on any one thing. In moods like this, I abandon novels and switch to short forms: essays and poetry, mostly. Facebook occasionally.

I’ve been dipping into Field Notes From a Hidden City by Esther Woolfson, a lovely, lyrical account of the urban wildlife Woolfson encounters over the course of a year in Aberdeen.  Woolfson is an engaging writer, and weaves snippets of science, myth and history into her own wonderfully nuanced observations. She and fellow Scot Kathleen Jamie have whetted my appetite to visit Scotland, and I’m hoping that by admitting that here, I’ve somehow assured myself of its happening.

I first read Jamie a few years ago on Inishbofin. Maybe it was the influence of the Atlantic or maybe it was the calling of the gulls, but her essays seemed to me a kind of homecoming. I return to her work again and again, always eagerly, always gratefully. Here she is reading from her essay The Hvalsalen. Enjoy.