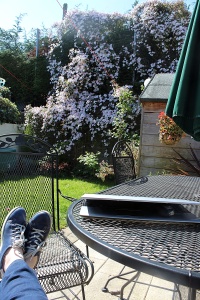 The best time to sit in your city garden is between two and four on an April afternoon. The men will have finished playing soccer and returned to their desks and cubicles. The ball will no longer thud against the hoarding; the referee’s whistle will no longer scream, and the air will no longer vibrate with the blue-tinged views of opposing captains.

The neighbourhood pigeons will be flying tight circles of whooshing light. A bird you can’t identify will sing in the Japanese maple and a pigeon, plump and complacent, will perch on the lamp post.

The neighbour will not be playing the Wolf Tones or the Dubliners on his specially bought, specially set up outside speakers. His grandchildren will not be visiting. Your own kids will be at school or college and it will be too early to think about dinner.

The bell in Ringsend church will toll the hour and every quarter in between. The clematis will be flowering pink and white, hiding the bare patch in the evergreens. A jet will sketch a contrail across the sky and you will have time to watch its airy emptiness dissolve into the void.

6 thoughts on “Sunlight in the Garden”