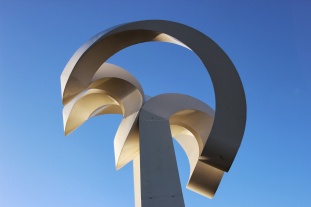 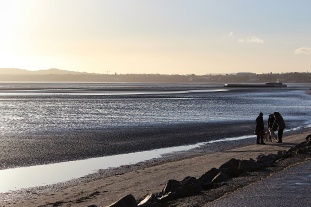 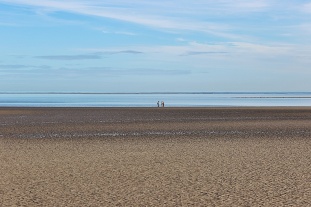 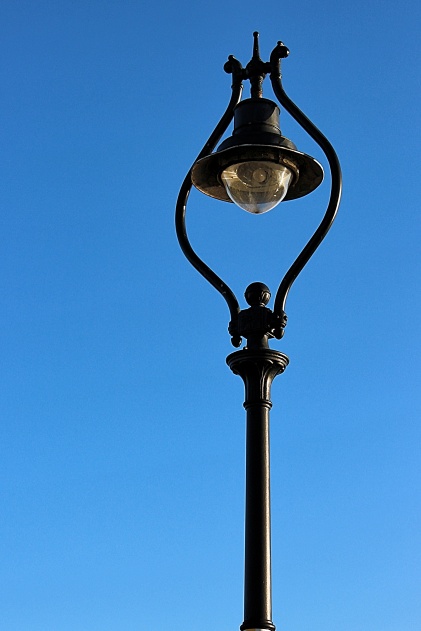 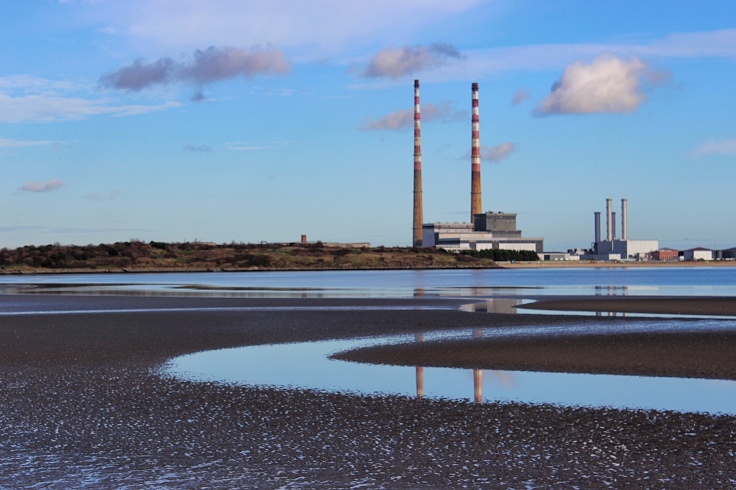 Last night, you fell asleep to wind and rain; this morning, a cornflower-blue sky, still as stone.

You knew the beach would be beautiful today; light glancing off channels and pools, a mile of space between you and the sea.

(You didn’t know it would be this beautiful.)

You like the Martello Tower, the strength of its construction. Oak beams support nine-foot wide granite walls. You like the Tower’s vigilance; its steadfast insistence on watching, waiting.  Two hundred years and counting.

You pass the remains of the Victorian Baths. You’ve seen old photographs of the pier that once connected the baths to the shore; sepia-toned images of elegant iron and timber. The pier’s heyday was short-lived: opened in 1884, demolished in 1920.

You turn at the end of the promenade. Two winters ago, you stood here and watched a flock of knot shape-shift in the evening sun. The birds rose and fell in unison, flashed black and silver as they swooped and turned.

You walk back towards the Tower, take your camera from your bag. A woman stops to say hello. “I’m glad you’re taking photos,” she says. You step onto the beach, puzzled by her comment.

You walk towards the sea, each step taking you farther from people, houses, cars.

You think about the woman who wants a stranger to make a record of it all.

You walk towards the cornflower-blue horizon and wonder what to do with all the space that’s opening up in front of you, all the time that’s closing in behind you.

Sandymount Strand stretches for 5 kilometres from Ringsend to Booterstown. It’s internationally important for the large number of birds it supports, including waders, terns and geese.

The promenade was added in the 1970s and is  a popular spot for walkers and joggers. On Christmas morning, it’s full of kids trying out their  new bikes.The Mexican Statue is called An Cailín Bán. It was denoted to Ireland in 2002 by the Mexican government and is the work of sculptor Sebastian. The Martello Tower was built in 1804 to protect against a Napoleanic invasion. It’s unusual in its construction – resting on oak beams rather than rock. All that remains of the Victorian Baths is the concrete substructure.

Sandymount Strand is famous as a setting for two of the episodes in James Joyce’s Ulysses.

But you knew that, didn’t you?