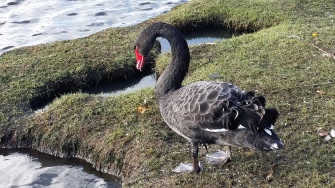 The exercise says to write down three things that stop me in my tracks over the course of a week. Three things seems optimistic.  My life is predictable and routine. Being surprised even once seems unlikely.

Still, I need to write something, so I decide to give it a go.

Next day, I meet up with my classmates for a bird watching trip. I’ve been meaning to learn about birds forever, and this year I finally enrolled in a course. This morning, our ‘safari’ is along the coast road in Malahide.

There are dog walkers and Sunday strollers aplenty. Still, we see a good range of coastal birds: oystercatchers and greenshanks, Brent geese and turnstones; even a solitary curlew.

We turn our attention inland, walk parallel to the coast. Two stonechats pose on a fence, allow us to come close; a meadow pipit calls from the distance. Our instructor signals us to stop. He trains his binoculars on the grass, indicates that we should do the same. Suddenly, a flock of goldfinches rises in front of us. The birds fly low and lovely, close to the ground.  They settle for a moment, rise again, settle; snack on thistles and teasels.

I must have seen this bird before. (In the wild, I mean. I’ve seen it in paintings, and on the cover of Donna Tartt’s novel.) But I never noticed it. Brown body; red and black head; yellow wing bars. Its Irish name is lasair choille, flame of the wood.

It’s exquisite and it’s tiny and my eyesight is poor. (I’ve only recently taken to using binoculars and scopes.) I imagine I encountered it before but saw it only as a blur.

I like this explanation better than the alternative: I didn’t see it because I didn’t pay attention.

The question of what else I’ve missed stuns me.

We pile into our cars and make our way to the Swords Estuary, home to a large flock of mute swans.

They’re a familiar sight to most Dubliners, frequenting the city’s rivers and canals in groups until they disperse for the breeding season.

It would be easy to confuse this flock with any other city flock, except here comes a black swan, unmistakable in his non-Irishness, smaller than his flockmates but equally regal, equally heart-stopping.

The strange heart beating where it lies

Our instructor Richard is a licensed bird-ringer. He surprises us by producing a bird-ringing kit, then coaxing a swan out of the water.

The swan is a large male, about three years old. (Later, we find out he weighs 12.5kg.) Richard approaches quickly, and before I can raise my camera, he captures the bird and pins him to the ground. A squawk and a flurry of wings and it’s all over.

The swan lies still, quiet and submissive now, its long neck stretched out on the grass. Richard examines its feet, lifting each carefully to search for cuts and calluses. “A country visitor,” he tells us. “No damage from city pavements.”

He takes a ring from his tackle box and fastens it around the swan’s leg. He notes the number on the ring in a small notebook, then checks the bird’s sex and age. Finally, he places a belt around the swan’s abdomen. The belt has a strap attached with a built-in scale, and Richard stands slowly and dangles the swan on the strap.

Before he releases him, Richard asks if we’d like to feel its heart. I place my hand on the swan’s breast, experience its slow and steady heartbeat.

I am stopped in my tracks all over again.